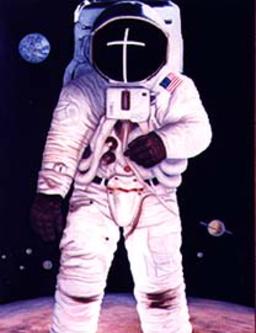 FIRST LANDING ON THE MOON

Oil on canvas. Painted around the canvas.

Selected for the 94-95 Nevada Biennial Competition. 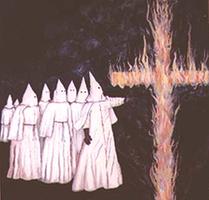 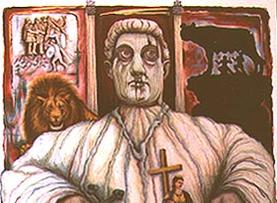 Not for Sale (Artist's collection) 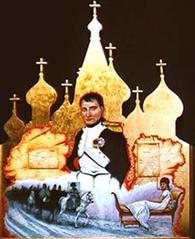 The Cross Series is an artistic study of the strongest symbol in history. Diane Hobbs was inspired by The First Landing Cross north of Virginia Beach. The cross is about 12 feet high in white granite situated on a lonely point where the pilgrims first landed then boarded ship again and finally landed at Jamestown.

The Renaissance marked the transition of the world from the Dark Ages to the beginnings of the modern era. The cross was a strong symbol throughtout the earlier period, particularly in the Crusades. Along with the blossoming of art, generally with a religious connection, the Renaissance brought forth the age of exploration and discovery. This led to the new world, the circumnavigation of the globe, and then logically to the new frontier, space.

One normally thinks of the cross as a religious symbol but the artist has chosen to use it in a more controversial manner -- as in the spirit of man -- intertwined in our daily lives. Some of the paintings are shown below.
​