​
So what are the threats to the United States in this World War IV? What is this Islamofascism and what is the Third Jihad? Why do some Muslims hate us so much? Does this come from the Qu’ran and is this also a civil war within Islam? After 9/11, we smashed the Taliban in Afghanistan but then we grabbed a tar baby in Iraq. What was the role of the neoconservatives? What about Israel and its powerful lobby in Washington, and where does oil fit in this equation? Of course, there are the weapons of mass destruction and the “Axis of Evil.” Iran and North Korea are on our plates. But there are other problems. There have been terrorist attacks in Europe and the prediction that Europe will go Muslim in coming decades. Al Qaeda is searching for a new base in Africa. Top that off with overpopulation in the world, the problems of illegal immigration in the US, the leftist surge in Latin America and there are many threats to the US as we charge into the 21st Century. Lurking always on the horizon is the specter of capitalistic Communist China. 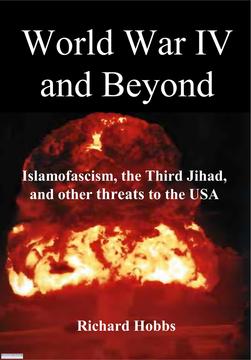 World War IV and Beyond

Islamofascism, the Third Jihad, and other threats to the USA